Some complex cases of Virgin Microtia present problems, because the area of the ear is very sunken, or a very low hair implant, or have a very old remnant that we can not use for reconstruction. This makes the reconstruction a little complicated and needs much more experience for resolution.

These complex cases are the least frequent, but when they touch us, patients and family members have to understand that in this peculiar situation we can perform the ear in any case, but the result can not be compared to others in which the local conditions are much more favorable.

When the hair invades the area where the ear should be placed, the frame can not be placed under the scalp because in addition to having hair, this area is very thick and is not suitable for the coverage of our new ear. if it is only a few millimeters, it may be useful to perform definitive hair removal, but when it is more than that, this skin should be replaced by a fascia tèmporoparietal flap and a skin graft..

In the photo on the left is the low implant of the patient’s hair, next to the diagram of the operation with the fascia flap drawn on its surface with the vessel that nourishes it, in this case instead of taking a graft of skin apart we take out in continuity with the area. Next to it, we see our frame placed and the graft folded downwards, after the red fascia flap, because it has abundant blood vessels, which is what we need (it is taken through the vertical incision that is seen), in the following picture the finished operation, and on the right the final result after raising the ear.

The secondary cases are much more complex than the cases of virgin microtia, because the presence of scars in the area complicates the situation a lot.

They are patients who have already received more than one surgery, who already have scars in other areas of the body of cartilage shots and skin grafts. They come tired, disappointed and above all ill-informed. They believe that with a last and simple operation they will achieve the result they want, because they believe that they already have part of the way gained. And it is just the opposite, because usually we must discard everything done and start over, with the aggravating factor that we no longer have the valuable local skin and scars that a virgin microtia offers us.

The situation worsens much more if the patient has already been removed cartilage from both sides, although sometimes in this instance is still cartilage with which we can work. To know it we need to do a study that lets us know how much cartilage we have left.

How we solve these cases?

USE OF LOCAL SKIN: CARTILAGE REPLACEMENT

This patient, sequel to an infected medpor, did not present the possibility of being reconstructed with the facia since it was previously used, therefore we had to take risks and place our cartilage model directly under the skin at first. In a second time we arrange the region of the drink and in a third time we raise the ear. 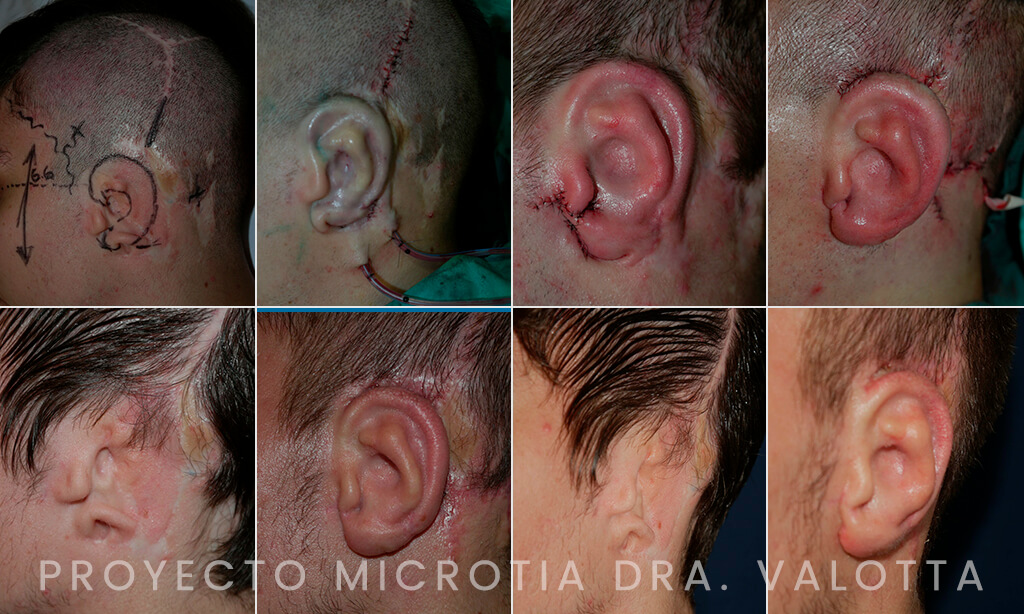 If the local skin is insufficient to cover our cartilage, or has many scars that make reconstruction impossible, we will have to not only replace the deformed cartilage with a new model, but we also have to reconstruct the SOFT TISSUES.

In most cases not only do we have to do the complete model again, removing cartilage from the side that was not touched, but we also have to make soft tissues because we need good coverage for our cartilage graft.

How do you do this? with a tissue rich in blood vessels that is located above the ear, below the scalp. This thin sheet of tissue with glasses, called TEMPOROPARIETAL FASCIA, we will place it above the model, and above this sheet is a skin graft.

To use this tissue safely, we must see if the artery that feeds it is present or if it has suffered damage as a result of some previous operation. To know this we have a device in the office called DOPPLER. This device allows us to detect the presentation of the artery to see if it is possible to use the fascia. It is essential to make the surgical plan, because if the artery is not present, the chances of success of this flap are greatly reduced.

In case the temporal artery is not present due to a previous damage (a scar that has cut it), we have another similar tissue behind, called FACIAL OCCIPITAL. It is not so good because it is thicker and less definition is achieved in the ear, but it is the only resource in some cases.

As you will see in the photos that follow, that we will try to be as less invasive as possible, the solution in these cases is not only not easy, but the results can not be compared to those obtained in a virgin microtia.

Some examples of these cases:

In this example, another professional had placed a medpor implant that became infected, in an attempt to save the situation they made several flaps that ruined the area leaving many scars. To complicate the situation, they had already used the temporoparietal fascia when they placed the medpor, and also cut the occipital artery. Therefore we were in a very difficult situation to solve.

In these cases where flaps can not be made in general external prostheses placed with a screw are indicated. In this case we performed a first time of fat graft placement in the area to improve the quality of the skin and on the face to correct its asymmetry (the patient presents microsomia).

In the photo on the left is the low implant of the patient’s hair, next to the diagram of the operation with the fascia flap drawn on its surface with the vessel that nourishes it, in this case instead of taking a graft of skin apart we take out in continuity with the area. Next to it, we see our frame placed and the graft folded downwards, after the red fascia flap, because it has abundant blood vessels, which is what we need (it is taken through the vertical incision that is seen), in the following picture the finished operation, and on the right the final result after raising the ear. 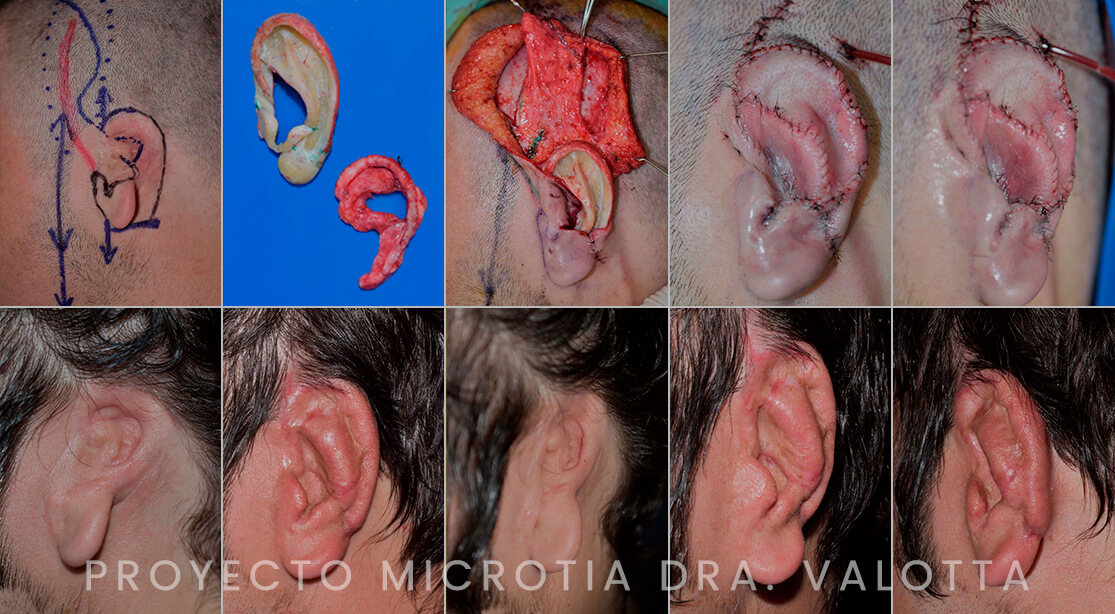 This patient had a reconstruction with cartilage with a poor aesthetic result. We removed the previous model and replaced it with a new model of costal cartilage opposite to that previously used. The model is covered with teporoparietal facsimile and skin grafts. We can see the results immediately after the surgery.

This patient presented an inesthetic reconstruction with cartilage on the left side, as can be seen in the photo on the left. We removed the deformed model and made a new model to replace it, as seen in the following photo. We placed the model in the area and since the local skin was insufficient to cover it, we made a temporoparietal fascia flap to provide vascularization to the ear. We were able to do it because fortunately the artery that nourishes this flap (temporal artery), was not cut by the previous operations. This flap is covered with a skin graft, as can be seen in the photo on the right, just after surgery. We need to rebuild the drink, and raise the ear.

This patient initially had a mild deformity, had been operated on 4 occasions, presenting not only multiple scars in the area but also compromise of the skin behind the ear, which is why the skin was completely fibrous, not having enough quality and quantity to cover the model.

On the left you can see the preoperative, in the following photo the model placed and the incision to make the fascia flap. (The reclined skin that is seen at the side is all the scarring skin, which does not serve for our reconstruction). In the photo on the right you can see the ear immediately after the operation, with the skin graft covering the fascia. As you can see, when there is local skin involvement, the results are not as in cases of virgin microtia. This patients must understand it very well, to not have false expectations of result.

This patient presented a sequel to reconstruction with a very fashionable technique in Argentina, which uses cartilage from the other ear. Never perform this technique because I believe that this cartilage is not enough to make an ear, as can be seen in this case, where the preoperative is seen in the photo on the left. In the center you can see the shapeless cartilage that was inside the skin pocket, which was replaced by our model of costal cartilage. In the photo on the right we can see the finished case, after 4 more surgeries.

As you can see, secondary cases (microtia already operated), are much more difficult to correct than cases of virgin microtia, and the results are never so good.

This patient, much loved by me, originally from Mexico, had 5 microtia surgeries with this unsatisfactory result (left photo). Look at the amount of scars, which had sectioned all the arteries in the area. With very little hope we discussed with the mother about the remote possibility of placing a model of cartilage under so damaged skin. Both she and the boy decided to take risks. In a first surgery we removed all the costal cartilage that was in the area and replaced it with our model (photos center left). In this first time we decided not to reconstruct the drink or the shell so as not to disturb the already scarce vascularization of the area.

We can see this first surgery completed in the center photo. The photo of the center right is after the second operation that consisted in the reconstruction of the drink. Then we can see immediately after the third operation, where we perform a lift of the ear, limited, given the conditions of the case. On the right, the finished ear.